skip to main | skip to sidebar

Jernej Stritih has a tough job. As the climate change boss for the whole country of Slovenia, he has a job of the future with inevitable ties to the past.

We visited Stritih in downtown Ljubljana on Tuesday, our fourth day of the Green Bike Tour (picture at right). We learned about the challenges he faces in advancing responsible, sustainable energy policy in his country. He is not a political appointee but he reports directly to the Prime Minister, but in a year of severe budget constraints he has not been able to hire many staff members.

What makes his job tough is that Slovenia, unlike many other former Eastern European Socialist states, retains its decades-old industrial structure. Its industry did not collapse with the fall of the Iron Curtain. One result of that: a road building program that produced a huge increase in auto miles — and boosted Slovenia's emissions.

Solar energy is far more the choice than wind for Slovenia's renewable energy options. Unlike good places to generate wind as we have in Iowa and the upper Midwest, Slovenia's potential is smaller — and development restrictions in some of its beautiful and wild countryside prohibit something as tall as a wind turbine.

Also Tuesday we visited Matej Andolsek, Deputy Head of the Global Challenges Division of the Ministry of Foreign Affairs. Slovenia is part of a "green group" of countries that are committed to sustainable development. He also cited the problem of increased vehicle traffic hindering a reduction of greenhouse gas emissions.

Our ride also took us to two hydroelectric plants that have solar panels installed all over — a good combination of renewable sources of energy, as shown in the picture of Joe Bolkcom with this post. We spent the rest of the day on a beautiful ride to Bled, home of a lake with a church on an island, overseen by a castle on a cliff. A great place for a ride around the lake to close out the day's tour. 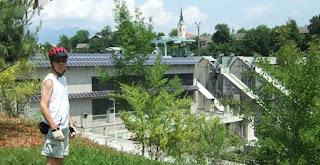 (These summaries are from David Osterberg, who has separate accounts of the Green Bike Tour available on The Des Moines Register website, and Joe Bolkcom is blogging separately at this link.)


The Green Bike Tour is sponsored by The University of Iowa's Center for Global and Regional Environmental Research, The Iowa Policy Project, and The Fred & Charlotte Hubbell Foundation, and Kelly Webworks.

Here you can read our entries on the Tour's progress. Please share your comments or ask questions of Green Bike Riders by clicking on "comments" below a post. Or, if you have other questions, email greenbiketour@gmail.com.

Want to know more?
* View pictures of our solar-powered bicycles.
* Read the 2006 Tour Summary for an example of a past Tour.
* Or visit www.greenbike.org for information on all seven past tours.